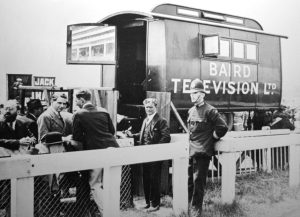 In 1928 John Logie Baird demonstrated “daylight television” from the rooftop of his studio in Long Acre. For the first time he was able to produce images from outside the studio and realised that the ability to broadcast live pictures from any location, an “outside broadcast”, was vital to the future of television.

His camera was very different to the electronic versions which would be in regular use within the next ten years. It was a mechanical drum with 30 mirrors around its edge and rotated at a high speed. Baird didn’t call it a camera, he preferred the term “scanner”. As the heavy metal drum rotated, the mirrors mounted on it scanned the scene being televised. The scanner was bulky, heavy and quite delicate. It also could not be moved when it was running, so panning and tilting were out of the question.

In 1931 Baird fitted the scanner inside an old caravan and parked it in the street outside to continue his experiments. Seeing the horses going up and down Long Acre on their way to Covent Garden market gave him the idea to try to televise the Derby

The scanner was arranged to look through a large mirror mounted on the inside of the caravan door, as the door was swung open, the scanner panned across the scene. So it was now possible to follow the action at the end of the race and was, for its day, a great success.

Of course by now, everyone started referring to the whole caravan as the “scanner” – especially as the caravan door was a vital part of the apparatus. A number of the Baird staff involved in these experiments were later employed by the BBC and they used the term “Scanner 1” to describe the EMI mobile television control room used for the 1937 Coronation. The name stuck with the BBC and they’ve used it ever since.

By 1936, the technology had moved on & the BBC were given the task of building and operating the London television station. On opening night there were two studios at the new Alexandra palace station, one using mechanical scanning equipment provided by the Baird company and the other using all-electronic cameras developed by EMI. There was to be a six month competition between the two systems to decide which one would be adopted. Initially there was very little to choose between the two in terms of picture quality, however it soon became clear that the Baird system was unreliable and very restrictive in operation.

As part of the push by EMI to highlight the advantages of their system, they produced some camera cables which were 1,000 feet long, allowing the cameras to be taken out of the studio (something the Baird system couldn’t do) and operated from the gardens and recreation areas in Alexandra park – effectively allowing Outside Broadcasts (albeit tied to the camera control units inside the studio). 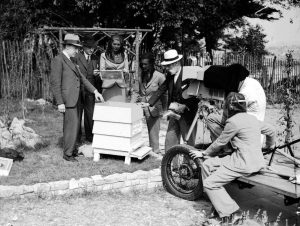 In early 1937 (by which time the Baird system had been abandoned) engineers at EMI developed a balanced feeder cable which was capable of carrying television signals for up to 8 miles without having to use repeater amplifiers. A ‘ring’ of cable round London was eventually installed (so if a section of cable failed, signals could still be sent round the rest of the ring) with access points in suitable locations.

Now that true Outside Broadcasts could be a reality, The BBC ordered a 3 camera Mobile Control Room (or MCR) from EMI at a cost of fourteen thousand pounds. It was delivered just in time for the Coronation of King George VI and Queen Elizabeth on 12 May 1937

For the Coronation the MCR was located at Hyde Park corner and the live broadcast of the Coronation Procession, passing through Apsley Gate, went off without a hitch.
The next outside broadcast came from Wimbledon, covering the Tennis Championships and the Davis Cup from the Centre Court. The pictures were sent by means of a transmitter van, which relayed the programmes back to a receiving aerial on the top of Alexandra Palace. The MCR remained at Wimbledon to cover the Davis Cup at the end of July 1937.

By the mid 1950s television Outside broadcasts had become commonplace and the BBC, as well as the new Independent Television contractors rushed to place orders for Mobile Control Rooms with the three main UK manufacturers; EMI, Marconi and Pye.

This Pye unit, using Pye Mk3 cameras dates from 1956. The following year an identical unit was purchased by ABC Television in Australia to cover the Melbourne Olympic games. The ABC unit is the earliest surviving MCR in existence. Now in the collections of the National Museums of Australia it had been partially restored, but was last working in 2000.

With the coming of colour television in the late 1970s, the monochrome MCRs were rapidly replaced with colour versions (or CMCRs) – although a small minority were retained and converted to colour. With very few exceptions all the MCRs have long since been scrapped and no complete original example remains in the UK. Even the Science museum does not possess an example – the nearest is an empty ex-Granada TV unit in the road transport collection, completely stripped out by a previous owner and converted into a horse box.

We now have the chance to save and restore MCR21, the earliest surviving BBC TV mobile control room.

MCR21 was one of ten mobile control rooms designed by the BBC in conjunction with the manufacturers, Pye TVT, and delivered to the BBC in 1963. MCR21 covered many important events including the 1964 British Grand Prix at Brands Hatch when Jim Clark won. The unit was at St Pauls Cathedral to cover the funeral of Sir Winston Churchill in 1965 and at Wembley for the final of the 1966 World Cup.

In 1968 MCR21 was converted from a 4-camera unit to a 2-camera colour one. Everything in MCR21 is essentially the same as it was before the conversion, apart from the camera control systems and the monitor stack. The original vision mixer was retained and modified, the sound mixer and talkback system remained unchanged, as did the all the surroundings.

It was originally equipped with 4 Pye Mk VI cameras. Only 56 of these cameras were made and as far as we know, only 3 survive, all of which are now part of the National Collection.  The Science Museum is supporting the project to restore MCR21 and the Curator of Television at Bradford is supporting our bid to acquire at least one of these cameras.

Why is it important to save and restore MCR21:

1) From the 1930s through to the 1980s Britain was at the cutting edge of television technology and programme making. Although a good representative collection of this uniquely British technological heritage does exist (in the Science Museum & in the care of passionate collectors), to the future researcher & student, the way in which these disparate items worked together is harder to understand. However a Mobile Control Room effectively contextualises the interrelationships and interconnections of all this complex technology. In the same way that a medical student may carry out intensive study of the human heart, taken in isolation without seeing its relationship to the whole body renders much of the study useless and incomprehensible. There are extant some examples of later Colour Mobile Control Rooms, one in the Science museum collections (although for some inexplicable reason they disposed of a second, more recent one). However MCR21 is the earliest surviving UK example of the earlier monochrome units.

Repair & renovation of the vehicle:

After 55 years, rust & corrosion to the vehicle body along with mechanical defects have taken their toll. The point is approaching when renovation will become extremely problematic and hugely expensive. At the moment it is possible to save the vast bulk of the vehicle in its original form, in another 10 years without this intervention it may well be impossible to do so.

Restoration of the electronic equipment:

The Australian MCR restoration faltered & eventually stopped because the champion of that work, Barry Lambert, was unable to locate enough people around Melbourne with the necessary skills, knowledge & experience to support him. He ultimately travelled halfway round the world to the National Museum of Photography, Film & Television in Bradford to seek help. We were able to help him with information and spare parts as well as putting him in touch with retired engineers in the UK who had worked with this type of equipment. Fortunately there is a much larger pool of people (& in a much smaller geographical area) in the UK who are familiar with this type of technology – in the case of MCR21 much of it is hybrid electronics, using valve technology alongside early germanium transistors. However the people who worked with equipment of this era are now into their 70s and sadly this store of knowledge is dwindling year on year, so we either save MCR21 now or risk losing it forever. Unlike the vehicle body & mechanical work, it is not possible to outsource the electronic restoration.

3) Inspiring science and technology. As a nation we need to attract more young people to take up physics, electronics & technology and we also have a duty to educate future generations about this country’s technical heritage.

Having a static exhibit of a few dusty old cameras for schools, colleges & universities to visit hardly does justice to the vibrant and exciting medium we are trying to portray. As the National Railway Museum understand very well, a cold dead steam railway locomotive in a display hall fails to inspire the public in the way that the restored Flying Scotsman in full steam thundering down the tracks does.

Having MCR21 as a mobile, working exhibit offers massive educational possibilities. At a country fair or historical vehicle event it will attract visitors of all ages, curious to see what goes on within the outside broadcast vehicles they are familiar with seeing at all major public events. When the NMPFT displayed a (non-operational) CMCR at the Great Yorkshire Show we were caught by surprise at the number of people who wanted to look inside & had to organise crowd control measures to cope.

For ‘pre-booked’ school & college events, the chance for students to operate the equipment and learn about the technology of the time can prove an exciting and inspiring experience. With a standard class size divided into 3 groups (one group presenting with a prepared script, one group operating the equipment under supervision and the third group watching the “programme” as viewers) and by repeating the exercise 3 times, everyone gets the chance to get involved. This is a technique we used to great effect for many years at the NMPFT.

For university students studying modern television production techniques, experiencing the methodology of the 1960s helps them understand why, to this day, we do things in a particular way and how technology changes over the years has driven programme production styles & techniques.

The Workshop Handbook for the Engine has been scanned and the PDF files added.

Work is completed on removing the technical equipment from  MCR21 and it is now at the vehicle restorers.

The BTTT held the project launch for MCR21 on the 16-18th August at the Amberley Chalk Pits Museum. There were displays of two vintage cameras, equipment, videos, etc. It was a successful weekend and well received by all who attended.

In parallel with the  vehicle restoration work our volunteer team is working on equipment that will be reinstalled on completion of the vehicle work.

We have formed a CIO trust to own and restore MCR21 and ensure its future. When completed we will exhibit MCR21 for educational purposes to explain the technology of how television programs were made.

Commissioned in 1963, MCR21 was one of the BBCs “Main Fleet” Outside Broadcast vans at the centre of outside broadcast programmes.

Sponsor MCR21, events, exhibits and even equipment. Contact us about becoming a patron of  MCR21, corporate sponsorship and other ways to support the Broadcast Television Technology Trust.

Scroll back to top